In July 1976, members of the club celebrated the Bicentennial with a sail race on July 4th (a Wednesday that year) off the Pier at Neff Park. That race generated so much excitement among the club’s sailors that they decided to make it a regular thing. The tradition, Wednesday night jib-and-main PHRF races, continues today, drawing new sailors and veteran racers alike. The competition, affectionately referred to as a beer-can race, serves as a regular date for club members to run around the buoys or join the dock committee at the end of the Pier. More recently, the club instituted an end-of-season race, The Kaiser Cup, a regatta for club members which takes place in September. The wind, the waves, and the warm sunshine were the winning formula for a glorious Lake St. Clair afternoon and the 8th annual GPBC Kaiser Cup Regatta. Eight boats came out to enjoy what turned out to be a fast winner-take-all race on September 11. The intrepid Dock Committee, anchored by the Old Cannon Whacker himself, Al LeChard, along with Shirley Momjian, assisted by Brad Birch and a host of onlookers, ran a flawless race. With Professor Jay Kaiser out on the race course instead his usual post on the dock, Dr. Mike Marsh, newly retired from racing, provided lively color commentary to the gathered spectators.

PC Buzz Young and his Conundrum crew of Paul Maiale and Dan Currier won the race, mainly due to a lucky break at the start. (Buzz says he owes a beer to new racer Erik Wahab.)

The traditional Kaiser Cup after-party was a smashing success. An unofficial head count of 65 attendees was testimony to the beautiful weather and enthusiasm for GPBC racing. Host PC Sheila Tomkowiak credits the success of the party to logistical support from Chris Kaiser, new member Kelly Basnett, Veronica Greiner, Sheri Allor, PC Jane Davies, and Sheila’s son, Philip Young. Thanks also go to the many attendees who brought dishes to pass. It was a yummy good time.

The awards ceremony acknowledged not just long-time racer Mike Marsh, who recently sold his boat, but also Don Healy, another freshly retired GPBC racer, going out on top of his game. Don accepted four blue, first-place flags, two for this season and two for the last. Also accepting flags for this season were Shahe Momjian, who kissed the presenter (his wife) when she bestowed a second-place flag. The crew of Saucy — Dale Scrace and family — took a third-place flag, and the Conundrum crew netted a second and a third.

Click here for photos from the regatta and after-party.

The first series of 2022 ended with winds ENE at 7 to 9 knots, just enough to keep the sea down. Although boats were moving, the dock committee, headed up by Jay (The Professor) Kaiser, decided to shorten the course. Why? Pizza was getting cold and the beer was getting warm. It was a lovely evening for the first post-series festivities.

Results for the first series presented no upsets:

A fleet of 11 boats turned out for the seventh annual Kaiser Cup on a beautiful Sunday afternoon. Shahe Momjian won the coveted trophy this year, his second Cup win. 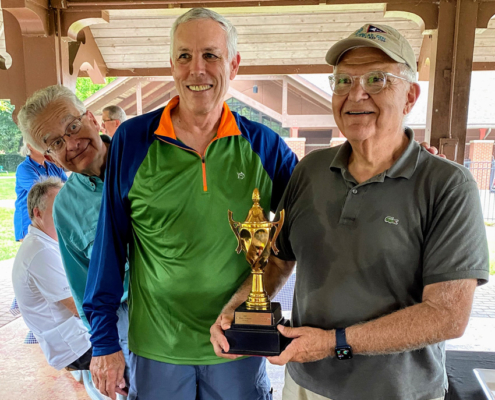